Roundtable Looks at Intersection between Hip-Hop and Social Activism 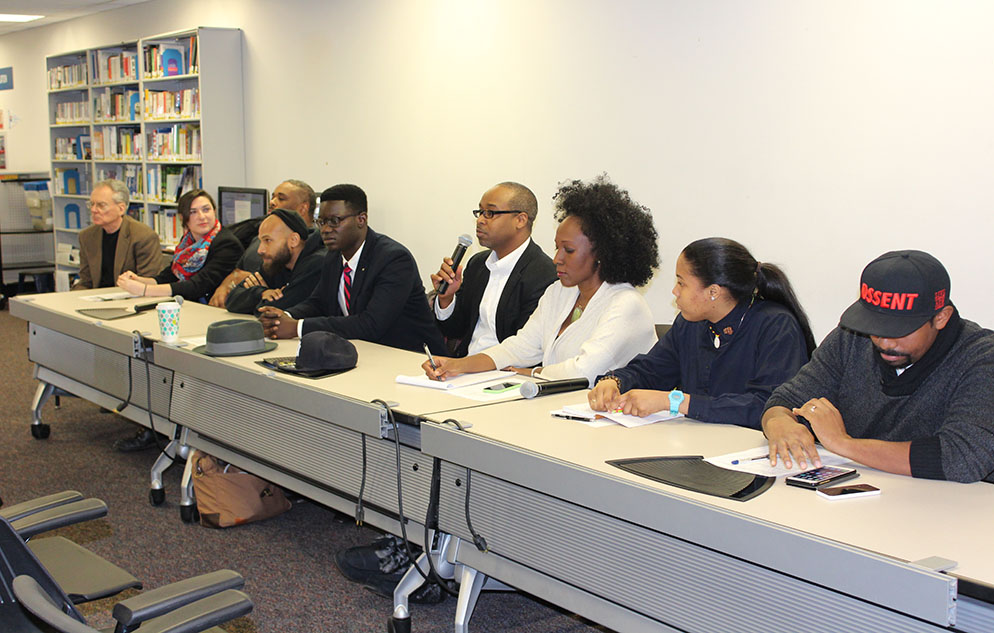 Guttman launched its celebration of Black History Month on February 2 with Hip-Hop as Social Activism, a roundtable discussion featuring a group of distinguished scholars, musicians, and activists discussing the intersections between hip-hop (music, culture and pedagogies) and social activism (social justice). Jarritt Sheel, an adjunct instructor at the College, served as moderator.

The discussion covered a range of topics including action, civic engagement, call and response, and change agents, including voice and agency. Panelists were asked to provide examples of social activism through hip-hop, what changes hip-hop has created in their neighborhoods, and ways to get more people to embrace hip-hop. Panelists agreed that hip-hop is a way to bring people together to have fun. They also noted that music allows people to speak more freely about issues and their feelings.

The event concluded with a live cipher led by panelist Toni Blackman with enthusiastic audience participation. The roundtable event will encourage students to think about ways to question their place in making positive change in their communities– whether through hip-hop or other activist channels.

Jarritt Sheel is a recent graduate of Teacher College, Columbia University with a Ed.M. in Music Education. He is currently completing his doctoral program in music and music education at Teachers College where he is researching the use of popular culture (hip-hop) in the domain of arts education, specifically music education, through a weekly study group he facilitates with a group of educators at various stages of their careers. He holds a B.S. in music from Florida A&M University, and a M.M. in jazz studies from Northern Illinois University. He currently works as a program assistant at Jazz at Lincoln Center (JALC) in the education department, and is an adjunct instructor at both Teachers College and Guttman Community College.

Stephen Preskill is a retired professor of Civic Engagement and Leadership in Wagner College’s Center for Leadership and Engagement who helped to advance Wagner’s commitment to community-engaged teaching and scholarship. He played a significant role in supporting student participation in community-based activism and leadership development.

Rashad Dobbins and Tim Hicks are members of the band The Cornel West Theory based in Washington, DC. The band is inspired by the struggles of the city’s ghettoes, Hip Hop, and the world politics and engages in social justice activism through the music and grassroots efforts in their communities.

Edmund Adjapong is a middle school science teacher in the Bronx who is a graduate student at Teachers College, Columbia University. He is currently the administrator for the Science Genius Program that engages urban students in the sciences through Hip-Hop, and the director of The Science Genius Academy, a program that encourages and prepares students to pursue STEM careers while providing mentoring and support.

Toni Blackman, the first American. Hip-Hop Ambassador to work with the U.S Department of State, is the world’s leading authority on Cyphers and has traveled to over 40 different countries. She is on the artist roster for Carnegie Hall Weill Music Institute and a sought after speaker and facilitator. Founder of the Freestyle Union and Rhyme like a Girl, a former Soros/Open Society Institute Fellow and an Echoing Green Fellow, Toni has participated in festivals in South Africa, Senegal, Germany, Spain, Canada, the UK and France.

Jermaine Fletcher is the founder of Curators of Hip-Hop (COHH).