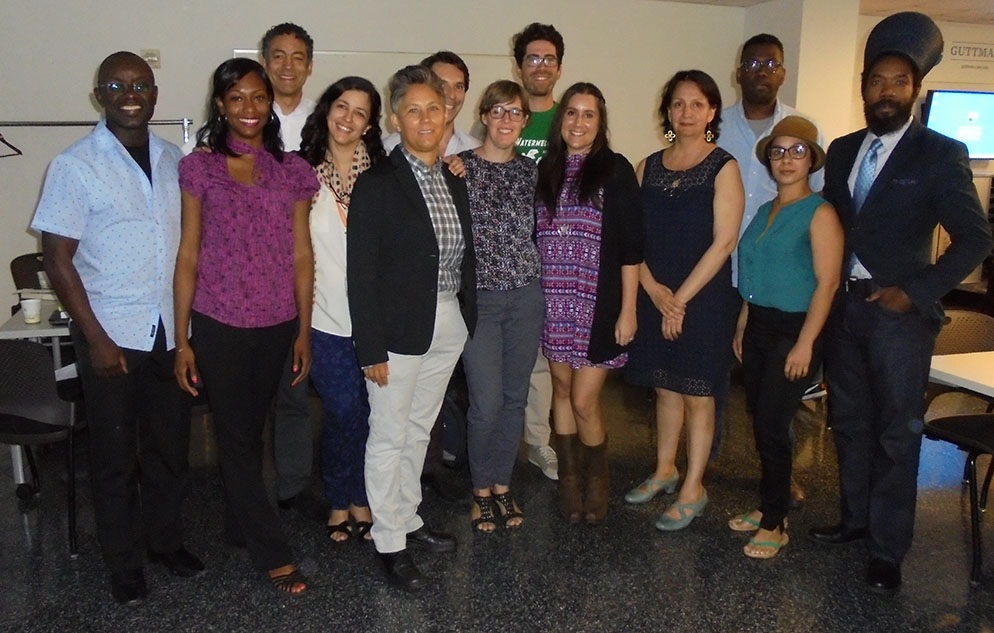 Tara Bahl is an Assistant Professor of Interdisciplinary Studies, and recently defended her doctoral dissertation at the CUNY Graduate Center in the Urban Education program, with a concentration in education policy. She also holds an M.A. from New York University and a B.A. from the University of Pittsburgh. She previously taught coursework at Long Island University, Brooklyn College, Mercy College, and Hunter College. Tara also served as a social science researcher at the Annenberg Institute for School Reform and College Access: Research & Action (CARA). Tara’s research interests live at the crossroads of urban education, participatory action research, youth development, and public policy. She is particularly interested in examining programs and strategies that reimagine the experiences of first-generation-to-college students as student-centered and meaningful–what this looks like in policy, practice, and the lives of students. At Guttman, Tara teaches first-year experience and social science courses.

Valdon Tau Battice, Substitute Instructor in English, was born in Basseterre, St. Kitts-Nevis, educated at The City College of New York and based in Brooklyn, New York. Valdon is a lifelong lover of the written word and its shaping of culture. He has taught a range of writing courses at The City College of New York and Borough of Manhattan Community College. With a keen interest in Post-Colonial Theory and Visual Anthropology, he is continuing graduate work and developing concurrently his first monographs about Harlem and Afro Latinas. At Guttman, Valdon specializes in composition courses.

April Burns, Assistant Professor of Psychology, holds a Ph.D. in Social Psychology from the CUNY Graduate Center, and a combined B.A. in Sociology and Psychology from the Johnston Center for Integrative Studies at Redlands University. She has previously taught at John Jay College, CUNY, in the psychology and gender studies departments, as well as sociology courses at the College of Staten Island, CUNY. Her research concerns the individual and relational impact of educational attainment, particularly for working class families and first-generation college graduates. April has written on issues of educational equity in higher education in Teachers College Record, and the Journal of Social Issues, and written on adolescent sexuality in relation to education in feminism and psychology and most recently in Sexuality Research and Social Policy. April will teach first-year experience and social science courses.

Luz Martin del Campo-Hermosillo, Substitute Assistant Professor of Anthropology, a native of Guadalajara, México, earned her Ph.D. in Anthropology, at the University of Florida, Gainesville. Her scholarship on the impact of gender on forest conservation, natural resource management, and landscape ethno-ecology in the Lacandón Rainforest in Chiapas, México, was supported by Land Use, Environmental Change Institute (LUECI). Funding for her research on the biological, geological, geographical, and socio-economic drivers impacting rainforest resource-use and deforestation among women and men in the Amazon Rainforest, Brazil, “Working Forest in the Tropics,” was provided by the National Science Foundation Integrative Graduate Education and Research Traineeship (IGERT). She held Méxican University Affiliation at the Universidad Autónoma de Chiapas, Tuxtla Gutierrez, México. Dr. Martin del Campo-Hermosillo is also an Alumna of The City College of New York-CUNY, where she earned her M.A. in Applied Urban Anthropology. At Guttman Community College, she will be teaching Ethnographies of Work and other social science and history classes.

Ryan W. Coughlan, Instructor of Sociology, is a doctoral candidate in Urban Systems at Rutgers University, Newark. He holds a M.A. in Science Education from City College and a B.A. in Environmental Policy Studies from Harvard. Ryan has taught at City College and Rutgers. He is coeditor of Sociology of Education: A Critical Reader (2015), coeditor of “Schools of Tomorrow,” Schools of Today: Progressive Education in the 21st Century (2016), coeditor of Leaders in the Sociology of Education (forthcoming), and coauthor of Exploring Education: An Introduction to the Foundations of Education (forthcoming). His research uses geospatial statistical methods to study school zoning practices, patterns of school segregation, social processes at a neighborhood level, and educational outcomes.

Maggie Dickinson, Assistant Professor of Interdisciplinary Studies, earned her Ph.D. in Cultural Anthropology from The CUNY Graduate Center and her B.A. in Philosophy, Politics and Economics from the University of Pennsylvania. She has taught previously at Queens College, SUNY New Paltz and New York University. Her most recent article, “Working for Food Stamps: The Post-Fordist Welfare State in New York City,” was published in American Ethnologist. She has written extensively about welfare and food policy, social movements, and urban space in both scholarly journals and popular outlets. She is currently working on a book about food stamps. Previously, she worked as a labor and community organizer on numerous campaigns for social justice in New York City. She will be teaching interdisciplinary urban studies courses at Guttman beginning in the fall of 2016.

Nicholas Fortier, Substitute Instructor in Humanities and Education, is a doctoral candidate in the Philosophy and Education program at Teachers College, Columbia University. He holds a Master’s in Education in the Teaching of Urban Adolescents with Disabilities from Long Island University, as well as a Master of Arts in Philosophy and Aesthetics from Stony Brook University. He has previously taught as a Graduate Coordinator at Guttman Community College, an adjunct at John Jay College of Criminal Justice, and a middle school special education teacher in Sunset Park Brooklyn. His scholarly work is focused on the relationship between ethics and aesthetics education, the way understandings of “public good” effect the space of the classroom, and the role of critique in the life of teachers and students. At Guttman, Nick teaches courses in the First Year Experience and courses in the humanities.

David Onserio Monda, Instructor of Political Science is a doctoral candidate in Public Administration at Walden University. He holds a M.A. and B.A. in International Relations from Alliant International University. He has taught courses in political science, public administration, and international relations at graduate and undergraduate levels at various universities and community colleges in the United States and abroad. His research interests include resource scarcity and ethnic conflict, dependency theory, neo-institutionalism and constructivist models of foreign policy analysis. He enjoys playing soccer, cross country running, swimming, travelling to exotic places around the world, hand drumming and volunteering for community service.

Tashana Samuel, Assistant Professor of Psychology, holds a Ph.D. in Psychology from The Graduate Center, and a B.A. in Philosophy and Psychology from Brooklyn College.  As a developmental psychologist, Tashana’s research focused on cognitive evaluation of children with autism spectrum disorder, and children with other cognitive and linguistic disabilities.  Her current work will focus on using mindfulness as an intervention for alleviation of math anxiety in community college students, while emphasizing the importance of adopting positive attitudes toward mathematics. She has taught child psychology courses at Brooklyn College, and was the recipient of several fellowships that promoted STEM education. At Guttman, Tashana teaches psychology and statistics.

Angelina Tallaj-Garcia, Assistant Professor of Arts and Humanities, holds a Ph.D. in Ethnomusicology from The CUNY Graduate Center, and a M.M. in piano performance from Brooklyn College. Prior to earning her Ph.D., she taught piano, theory, and chamber music at Third Street Music School, where she served as Piano Chairperson. She has also performed in major venues such as Lincoln Center and Carnegie Hall. Dr. Tallaj has taught ethnomusicology at Brooklyn College, John Jay College, and Franklin and Marshall College in Pennsylvania. Her research focuses on Dominican and Caribbean music. Some of her publications include “From Bulls to Music: Social, Religious, and Economic Aspects of a Pilgrimage to “Nuestra Señora, La Vírgen de Altagracia,” “Llegó La Hora: Fighting for a Queer Identity in the Dominican Republic,” and “’A Country That Ain’t Really Belong To Me’: Dominicanyorks, Identity and Popular Music.”

Luis Zambrano, Instructor of Mathematics, holds a M.S. in Pure Mathematics from California State University, and a B.S. in Chemical Engineering from the University of Minnesota. He taught previously in CUNY at LaGuardia Community College and at Baruch College, where he was nominated for a Presidential Award for Distinguished Teaching. Luis has served in many initiatives both outside and within CUNY to support the success of all students in undergraduate mathematics coursework.