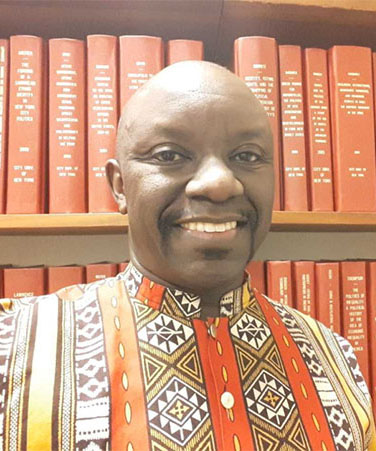 The American Political Science Association (APSA) announced that David Monda, an Instructor of Political Science at Guttman Community College who is currently pursuing a Ph.D. in political science at the Graduate Center, City University of New York (CUNY), has been named a 2018-2019 APSA Minority Fellowship Program (MFP) Fellow, Spring Cycle,

David specializes in international relations and comparative politics. He is also an instructor of political science at Guttman Community College (CUNY). His research interests include diaspora migration, the intersection of foreign policy and national identity in developing contexts, securitization of migration policy and feminist construction of international relations. His unique experiences growing up in Kenya have shaped his passion to address the political and economic factors that affect migrant communities from the developing world. This summer, David will use the APSA MFP Fellowship to research the construction of national identity in developing contexts focusing on the Garifuna, an Afro-Belizean diaspora community. He hopes to broaden the understanding of normative and ideational structures that construct the societal identity of the modern Belizean state. More broadly, he hopes this research will add to the understanding of the construction of the foreign policies of developing nations.

The MFP was established in 1969 to increase the number of under-represented scholars in the political science discipline. Since 1969, the APSA Minority Fellowship has designated more than 600 Fellows, both funded and unfunded, and contributed to the completion of doctoral political science programs for over 100 individuals. Fall fellows are college or university seniors, graduates, or Master’s students who plan on applying to a PhD program in political science. Spring fellows are first and second year PhD students in political science. APSA Minority Fellows are very active in the discipline as faculty members, researchers, and mentors. Visit www.apsanet.org/mfp to learn more about the APSA MFP program and recent fellows.