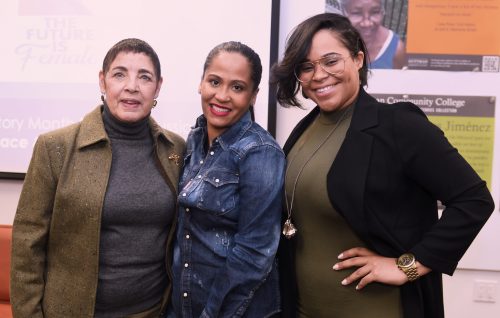 Euridice Bonilla and Yajaira Gonzalez, both restaurant entrepreneurs, and Tania M. Lambert, journalist, spoke about the struggles they have faced as women in their industries. Because of their gender, they had to work harder and often be “a little louder” than their male counterparts in order to be noticed and achieve their goals. Ms. Lambert stressed the importance of self-advocacy and fighting against unfair treatment. Ms. Bonilla said that thanks to the recent women’s empowerment movement things are moving forward and slowly changing for the better. The panelists emphasized that support from other women is vital. Their advice was to ignore those who want to create drama or spread rumors and surround oneself with those who emit positive energy.

During the event, the audience experienced the power of networking. The panelists talked about how their own networks helped them connect with each other to create a support system for their professional and private endeavors to thrive. They listed Latinas in Power (LIPS) and Mami Chula Social Club as groups that create community and strong, supportive networks for women. Ms. Bonilla and Ms. Gonzalez also talked about using their businesses as spaces for the community to host events and strengthen bonds. The lively discussion coincidentally revealed surprising connections among the panelists and members of the audience.

When asked how they practiced self-care, the panelists admitted that it is not easy to find time to care for themselves while managing careers, businesses and families, but it is necessary. “Your body is a temple, and it’s only borrowed,” so it’s important to take care, said Ms. Bonilla. “Sometimes you just have to put your foot down and take a mental health day,” said Ms. Gonzalez. Ms. Lambert listed salsa dancing and swimming as her hobbies. When asked how they deal with the guilt that often accompanies working women, they said that it’s a feeling that is “always there” and part of the process, but women shouldn’t give into it. The panel ended with a conversation about the importance of positivity and gratitude.

Euridicis Bonilla is the owner of Bodega Pizza in Washington Heights. She has 15 years of experience in the hospitality industry. She regularly hosts events to empower women and form supportive networks. She also serves as a business consultant for young entrepreneurs.

Yajaira Gonzalez owns Pop+Pour in upper Manhattan. She is a recipient of the 2018 Johnny Walker Spirits Entrepreneur Award and the 2019 New York State Assembly Citation “Young & Rising Award.” Gonzalez gives back to her community by hosting dinners for cancer patients, organizing donations for Puerto Rico and Venezuela, Divas Leading Inc., and Latinas United.

Tania M. Lambert, is a New York City-based journalist of Cuban descent with more than 25 years experience. She’s currently a consultant to The Ford Foundation, and working on a White Paper to promote the visibility of Latinx artists and scholars in academia, museums and art galleries across the nation. For her passion project, she is managing editor for a book about LIPS (Latinas in Power), a sisterhood of women, including Lambert, and about 20 journalists, lawyers, and publicists, who have been meeting continually in New York City for more than 25 years for the purpose of supporting one another through career and life challenges.