Award-Winning Journalist Meets with Students and Conducts Forum on Haiti 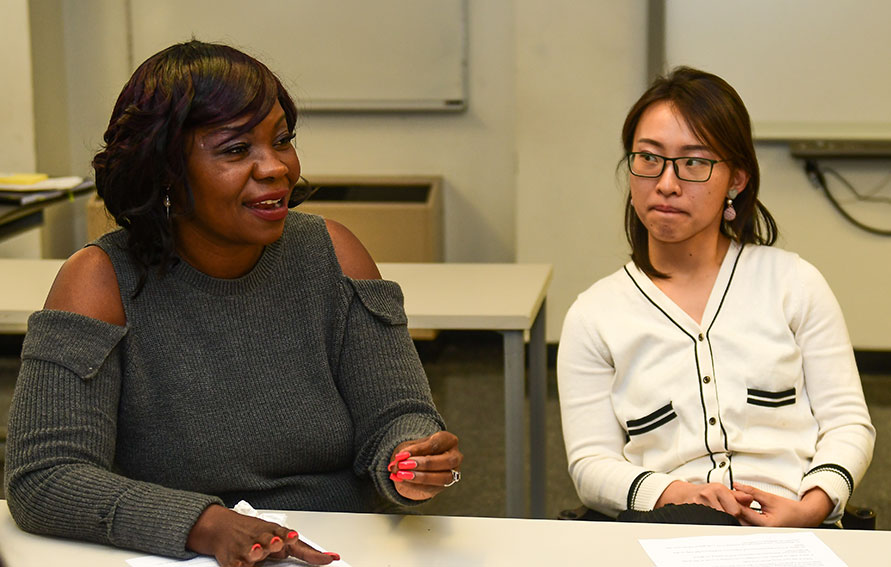 Jacqueline Charles, a Pulitzer Prize finalist and Emmy Award-winning Caribbean correspondent at the Miami Herald, visited Guttman on March 28 to discuss her journalism career and current reporting project in Haiti as part of Guttman’s continued partnership with the Pulitzer Center. The partnership aims to increase access to global learning opportunities on campus as part of the Global Guttman program.

Jacqueline began her journalism career at the Miami Herald as a 14-year-old high school intern before graduating from the University of North Carolina at Chapel Hill’s School of Journalism and Mass Communication. Her assignments have taken her throughout the Caribbean as well as Liberia, Kenya, Italy, and most recently, Mexico, Canada, and Chile to report on the plight of Haitian migrants.

The noted journalist began the day as a guest speaker in Professor Meghan Gilbert Hickey’s Introduction to Communications class where she discussed her journalism career and provided insights into her current project: an investigation of the lack of resources in Haiti to treat cancer patients. In the afternoon, she led a career Q&A with students, providing an insider’s view of her typical week as a reporter and how she juggles late-breaking news with her other work and personal obligations. She stressed the difference between being a writer and being a reporter (one who investigates to get information) and admitted a good journalist likes a scoop and being the first to break a story.  She counseled students that “the more you report, the better you get. You learn from each story.” Jin Ding, the Pulitzer Center’s Communications and Marketing Manager, also shared her experiences as journalist.

Jacqueline concluded her visit with an evening forum to present her latest reporting work from Haiti about the lack of resources and funds to care for those suffering from cancer. Through startling statistics and photos, she discussed how having cancer in Haiti is like getting a death sentence. Treatments are hard to come by, and with limited options, the poor and powerless pay a terrible price for the reluctance of Haiti’s leaders to invest in their care. Among the suffering are the occasional hopeful stories, such as a Miami hospital and Haiti-based charity that enabled a 14-year old boy to obtain proper cancer treatment at a South Florida medical facility.