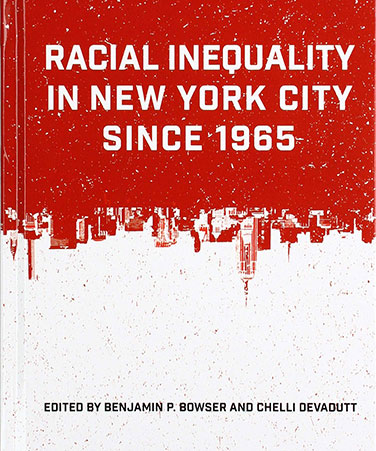 Assistant Professor of History Dr. James Rodriguez has been published as a contributor to Racial Inequality in New York City since 1965, recently released by SUNY Press. This comprehensive anthology comprises the research presented at the Walter Stafford Symposium held in 2016, under the auspices of the Walter Stafford Project on Inequality in New York City at New York University (NYU). Event participants interrogated the state and effects of racial inequality in New York City, identified social and economic conditions, practices, and policies that perpetuate this inequality, and produced recommendations for actions to best address the crisis. Edited by Dr. Benjamin P. Bowser and Chelli Devadutt, the collection “explores what city government has done and failed to do to address racial inequality,” over the past five decades, and “examines the changes in circumstances of Asian, Latino, West Indian, and African American New Yorkers, …relative to their white counterparts.”

Dr. Rodriguez co-authored the chapter “Social Capital, Gentrification, and Inequality in New York City,” with Drs. Robert L. Hawkins of NYU and Andrew Wilkes of the CUNY Graduate Center. In it, the scholars trace the role of social capital in the economic and social standing of African Americans from the formation of mutual aid societies in the late 18th century, while slavery was an institutional and social norm; through the Great Migration, Great Depression, and the post-World War II Civil Rights Movement; and into the present day. The chapter provides a historical framework for assessing how social capital has been both an instrumental and a limited strategy for improving the socioeconomic conditions facing and experienced by African Americans in New York City.

Before joining Guttman in 2017, Dr. Rodriguez graduated from the Ph.D. program in American Studies at NYU, completing his dissertation on race, police, public housing policy and gentrification. He also holds a Bachelor’s degree in English and Psychology from Brooklyn College, CUNY, with a minor in Puerto Rican and Latino Studies. Alongside teaching and academic research, he has worked as a public housing and land use organizer on the Lower East Side and a curriculum developer and consultant at the Murphy Institute, CUNY. At Guttman, Dr. Rodriguez is a Team Leader for the First Year Experience; he teaches the Critical Issue component of City Seminar in the First-Year Experience as well as courses in the Urban Studies Program.