Ernest Joseph Butts, Class of 2018, Is a Trailblazing Change-Maker 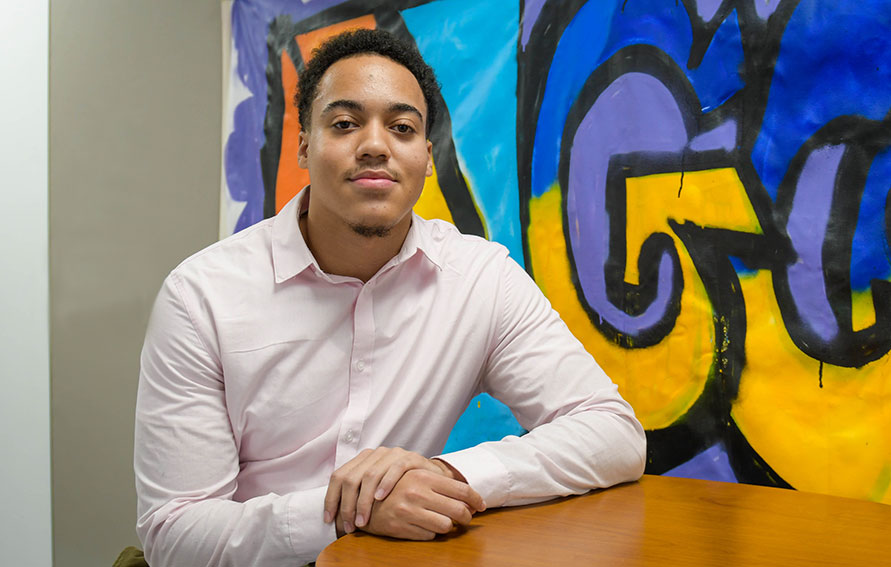 Ernest Butts, Guttman class of 2018, isn’t afraid of a full workload in the name of social justice. With a calm and confident demeanor, he talks passionately about wanting to be an advocate for change. Since he began his college journey at Guttman, Ernest has built an impressive resume that sets him well on his way to create a positive impact on his community. While at Guttman, he majored in Urban Studies, was an Student Government Association senator and secretary, a United Men of Color (UMOC) Peer Mentor, and he traveled to Ecuador with Global Guttman. He’s currently a Presidential Intern at John Jay College of Criminal Justice where he’s a senior studying public administration, with a concentration in public policy. Last summer, he was a Teaching Fellow at Columbia Teachers College helping ESL students learn science, and he went to Puerto Rico with the CUNY Service Corps to help with the rebuilding efforts. Ernest also holds a part-time position at the Campaign for Black Male Achievement, and will soon start studying for the LSAT and GRE.

Mr. Butts is a first-generation college graduate who grew up in Spanish Harlem in Manhattan. His family has lived in the neighborhood since his grandparents emigrated from Puerto Rico in the late 1960’s. He ascribes his passion for ensuring representation for the Latino and African American communities to his upbringing in Spanish Harlem. “For me, to do these things, it’s me reinventing and reimagining what’s possible for people like me. To come from that type of environment and to become a lawyer or a teacher or a policy maker or public administrator, is big for me,” he says. Ernest knows that by moving forward, he’s “breaking barriers” for himself, his family, and his community.

Ernest says that his experience at Guttman led him to many opportunities that are propelling him forward. He credits his mentors Dr. Marcus Allen, Professor of Political Science and UMOC Program Director; Nestor Melendez, Director of Campus Life; and Andrew Bennett, Associate Director of Mentoring, for guiding and pushing him to pursue his goals. Ernest says that Dr. Allen approached him during his first semester at Guttman and encouraged him to join UMOC. That experience was a catalyst for everything Ernest has accomplished so far.

The transition from Guttman to John Jay College wasn’t easy for Ernest. After earning a low GPA and being rejected for an internship during his first semester at the senior college, he realized he needed to step up to succeed. He explored and took advantage of resources the school offered and has since brought up his GPA. At the school’s career center, he worked on his resume and applied to every opportunity that was offered in his fields of interest, which led him to become a Presidential Intern at John Jay. In his second semester at John Jay, Ernest participated in the Pre-Law Institute. There, he took advantage of a partnership the program has with Columbia, and eventually landed his Teaching Fellowship at the Teachers College.

Affecting change is the focus of many of the activities Ernest has been involved in. His teaching residency culminated in a video project on how to improve NYC waterways through policy. As a Black Male Initiative Fellow at the Campaign for Black Male Achievement, where he now works part-time, he published an article about feminism.

The advice Ernest would give to incoming Guttman students is to “have an open eye and ear” about what’s happening at the College. He would encourage students to participate in UMOC or Women of G.R.I.T., study abroad through Global Guttman, and use all the resources available to students at the College.

Ernest is a strong believer in the Guttman model, and says the school understand the communities it serves. He says that providing resources to the Latin and African American student population is “vital and essential” to keep moving forward. He sings Guttman’s praises about the sense of belonging he experienced, as well as the help he received while attending. His next step is to take his LSAT and GRE, with a goal of earning a combined MPA and JD degree from John Jay.