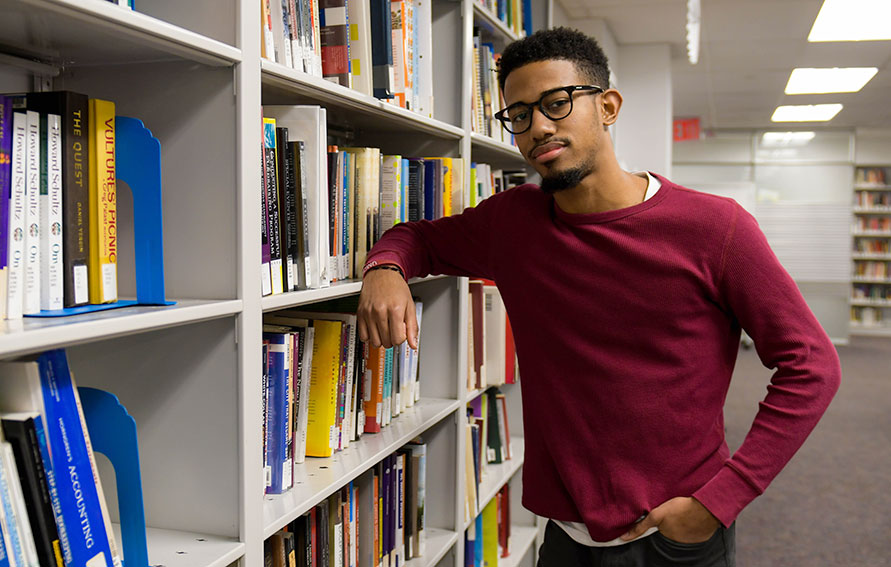 Starlin Pimentel is all about making progress. He calls himself passionate and diligent about his work, and he strives for excellence every day. “I don’t want to just stay afloat, I want to raise my standards,” he says. He meditates regularly. At nineteen years old, he wisely says that the journey to success takes time, hard work, and self-awareness. Starlin is the first in his family to attend college. He grew up in the Dominican Republic and was raised in the Bronx. He confidently states, “I want to become someone who people look up to — someone of value.”

Starlin finds himself right at home here at Guttman Community College. The first-year student says his favorite thing about the school is its positive energy, and the fact that people like him – driven to succeed, active and eager to help, surround him. In contrast to his years in high school, Guttman makes him feel inspired. He has recently been elected United Men of Color President; he’s doing well in his classes, he helped start a Guttman soccer team, and he works part-time in the Single Stop office. “Head into the unknown and see what you like and don’t like” was a mantra Starlin thought of when starting Guttman.

Starlin really enjoys meeting new people. He says Guttman creates a sense of community through the many opportunities available to students here. He joined UMOC to keep himself on track in his schoolwork, and to become a more active player in discussions about politics and current affairs. He knows that UMOC will also help him build a professional network. In his new role as UMOC President, he hopes to encourage more active participation from current members, and he would like to improve the vetting process for new members to ensure the student organization truly serves its purpose.

One of the aspects of the college experience Starlin appreciates the most is the level of independence his professors encourage. He appreciates the First Year Experience curriculum at Guttman. During City Seminar in his first semester, he loved having the chance to do research and collect data outside the classroom — in the streets of New York City. He’s currently excited about his new, challenging business class, and Arts in New York City (where he was learning to tango – a different kind of challenge he welcomed).

Soccer is one of Starlin’s hobbies. He and a friend had an idea to organize a first-ever soccer team at Guttman, and with support from staff, that’s now a reality. Seventeen students have joined so far. Students Renahn Barcia and Cristofer Medina coach the team, and they practice most often on a field on Roosevelt Island. Starlin says that staying active and eating healthy is helping him stay driven and motivated. He solemnly admits that he used to be “very lazy” and didn’t eat well, but he took the time to educate himself on the connection between body and mind, and he now actively practices a good diet and exercise in addition to meditation. “I’m in a better mood and have more stamina,” he says.

One of Starlin’s greatest achievements in school so far has been receiving A’s and B’s in his classes, something he says he never experienced in high school. He is a business administration major and is thriving academically and socially at Guttman. In his many roles at the College people have come to know him, and he finds it fulfilling to be able to help his peers connect with each other as well. Directly helping to create a community gives Starlin a “happy feeling,” and he hopes that in the future he will make an impact that will create a positive ripple effect on others. “We will be raising each other [up],” he says.

When he graduates from Guttman, Starlin wants to pursue a business degree and be an entrepreneur. “I will be really persistent and consistent about it,” he says, and truly believes his focus on physical and mental health will help him reach his goals. Since starting his journey of self-awareness and health, Starlin says he is a lot less stressed. With a conviction in his voice, he says, “Every day is just great!”