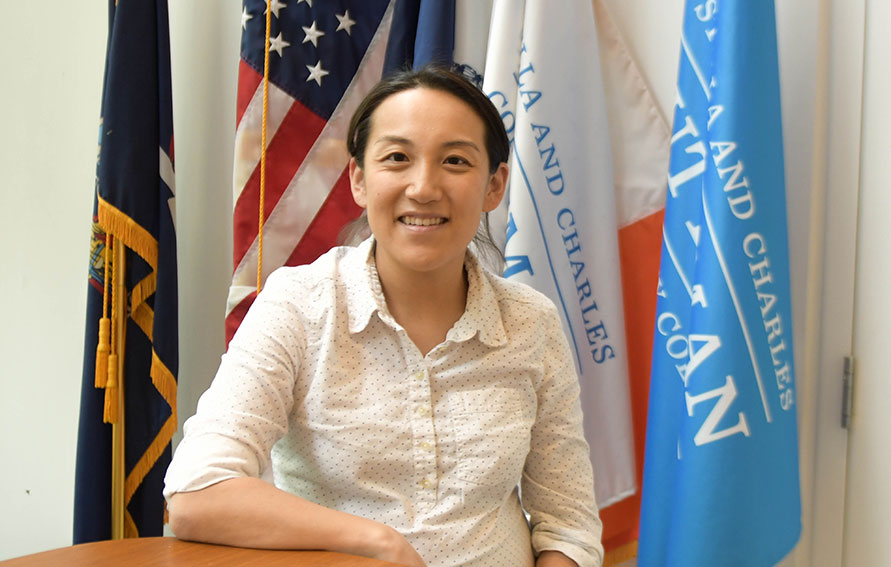 Assistant Professor of Mathematics Dr. Vivian Lim finds Guttman “the perfect setting for being able to teach math in a way that is meaningful, that engages students critically about the world.” Teaching the Quantitative Reasoning (QR) component of City Seminar in the First-Year Experience since Fall 2017 has been ideal as “one of the fundamental learning outcomes is students being critical and using math in an interdisciplinary way.” Dr. Lim freely admits that “this is my dream job,” an opportunity to connect math directly to her students’ lives and empower them as civic agents.

“Because it’s easier to reason through a real-world scenario than something abstract,” Dr. Lim leads students to discovering that they already possess valuable math skills and “accessing that knowledge.” Foregoing lectures or starting a lesson with a formula to be grasped, students are assigned problems that might be solved in multiple ways and guided to “investigate using their own methods first,” then debriefing various approaches. “I want you to see the math in yourself,” Dr. Lim tells Guttman scholars, “so that it’s coming from you, rather than being alien to you.”

In a City Seminar integrated assignment befitting her progressive teaching philosophy, Dr. Lim’s students partook in an elaborate simulation of structural inequality over a period of a year. Each player began the board game with a character reflecting New York City demographics and the ability to make decisions and react to events according to their resources and identities. The second semester, students layered urban systems like education or transportation into the game to trace the impacts of these systems on their characters’ lives. Not only did students use math to prove particular inequalities, but, crucially, they also recognized their own potential to effect change by applying mathematical concepts. Students proposed, voted on, and implemented policy reforms to test whether their math-based solutions – some quite radical – resulted in “a more equitable society.”

In addition to curriculum development in the burgeoning field of social justice mathematics education, Dr. Lim aims to “make it easier for people to design lessons for their own classrooms… Instead of just being about the math content I want to cover or the issue that I want to look at,” she endeavors to create “hybrid” categories for more effectively searching available social justice math data and materials. Dr. Lim’s pedagogy and research are dedicated to answering her bold question: “Can we redefine what it means to be mathematical so that it encompasses more than just academic math?”