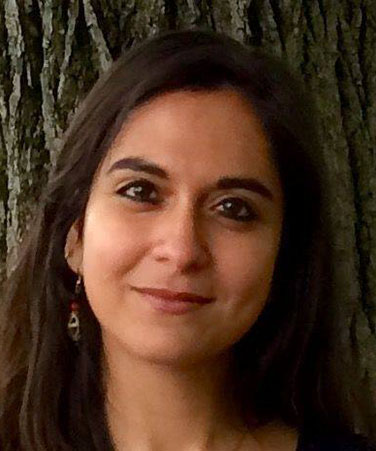 “We can disagree and still be friends… Most of the time, a literature classroom is a philosophical space. It’s about how we live, how we react to each other, how we deal with love, and who we are constantly becoming. So, disagreement and argument… help us really understand what we think and why.”

Associate Professor of English Dr. Ria Banerjee specializes in literary modernism, primarily Anglophone British, European, and Indian writing of the 1910s-1930s – “partly because I love that ‘modernist mood’ and partly because so much of what people lived through at the beginning of the 20th century bears eerie parallels to what we are going through now.” Presently, she is at work on the manuscript of her book, tentatively titled Drafty Houses, where she posits that the way “modernist [English] authors wrote about changing, renovating, and restructuring houses and personal spaces in fiction actually speaks to how they thought the UK ought to change politically.” Avoiding direct confrontation with the authorities, “established authors like T. S. Eliot and Virginia Woolf wrote about rooms, buildings, and houses as a kind of substitute for… the nation as a shelter for citizens.” These writers became what Dr. Banerjee calls “tepid activists,” who were “outraged at the many political atrocities carried out by the UK at home and abroad, especially in the British colonies, [but] tried to find ways to be critical without being arrested,“ or having their writing banned.

Beginning her tenure at Guttman in a part-time capacity in 2013, Dr. Banerjee has rapidly risen in rank and assumed leadership of the College’s largest Program of Study as one of the Program Coordinators of the Liberal Arts and Sciences, heading the Social Sciences and Humanities track. Simultaneously, she has taught Composition I and II to first-year students and, in the LAS Program, the courses Cities in Film and Literature, Topics in Literature, and the LAS Capstone, all focused on her areas of expertise in literary modernism; World War I and the interwar years; drama and film studies; and 20th century colonialism.

Dr. Banerjee sees no competition between the written word and the silver screen. Admittedly, she is “a big film person” and has run an annual LAS Film Series that she intends to offer even in the context of remote instruction. In this spirit of expanding learning opportunities for students, Dr. Banerjee is particularly proud of establishing the Poetry Abroad program “in conjunction with the University of London and the T. S. Eliot International Summer School in 2019.” She mentored and accompanied the two Guttman students who won scholarships and then attended the week-long Summer School in London, UK. “I think all three of us had an experience that we will not quickly forget!”

Her teaching style is “a mix of lectures and hands-on experiential and research-based activities,” Dr. Banerjee reports. The students in her Topics in Literature: Modern Drama course, covering 20th century European, US, and South American modernist plays, “always went to see a Broadway show or dance version of one of the plays we read for class.” In the topics course on Twentieth Century Literature and Film, a teaching artist – “a creative writer with a Ph.D., quite rare in the field!” – led students in “creat[ing] their own research-based narratives about colonial history” on Blackboard in an assignment called The Storytelling Project. Not only did her students valiantly engage the brutal and personal content while “locked indoors during the peak of the pandemic” in NYC, but some even reconsidered their undergraduate majors after “look[ing] into their heritage and figur[ing] out their place in the colonial history that we were also exploring via literature and film.”

Dr. Banerjee credits her students for teaching her “how to be explicit in what and why I teach. I can’t tell students that they must study early 20th century literature ‘just because’.” Instead, she must articulate exactly why her “scholarly work is relevant and useful to pursue,” namely that she is “always looking to understand how the example of modernist responses or answers to the social troubles and events they faced can be a guide for us as we navigate our own.” Furthermore, “pursuing literary studies makes us better at understanding how rhetoric works [and] helps us be more empathetic and acute about the world around us.” Dr. Banerjee excitedly pushes her students to “read more books to understand more people!”