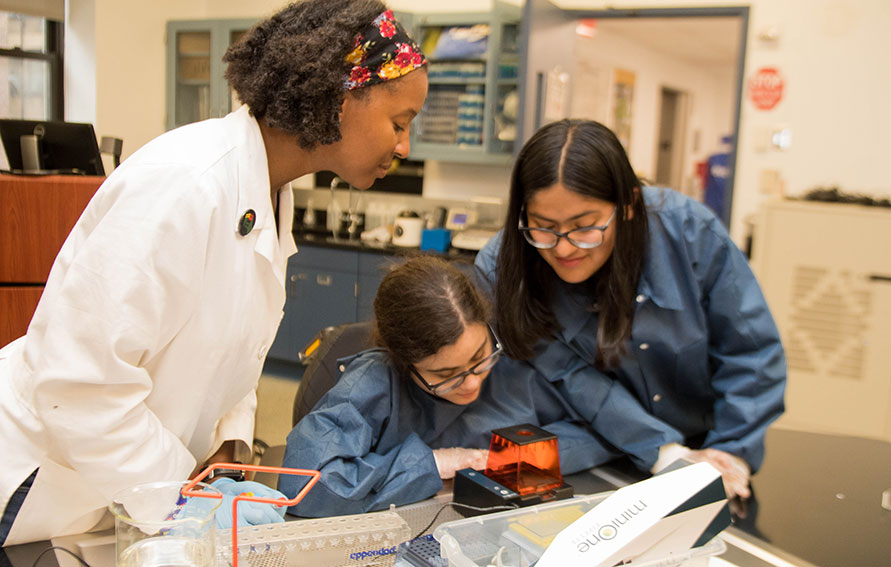 “More than anything, I want our students to know that they can succeed in science and math. They don’t have to pursue it, but I don’t want them to think that it’s not for them for any particular reason, except [if they don’t choose it.] If they want to, they can be good at it, or they can be interested in it… I just want them to feel like they belong. That it’s for them, if they want it.”

Dr. Karla Fuller, Associate Professor of Biology and Program Coordinator of Science, bears the unique distinction of being the very first faculty hired at Guttman, prior to the convocation of its inaugural first-year class in 2012 and the naming of the College. Seeing it as the urban likeness of historically Black colleges and universities (HBCU), she determined to fulfill her “mission in life” – giving students of color sustained opportunities to “have that moment like, ‘Oh, maybe I could study science’,” the realization critical to “increasing the overall percentage of underrepresented people in America who are scientists, the number of Black and Latino scientists in the field, and this means pursuing graduate studies or professional school after a Bachelor’s degree.” To this ambitious end, Dr. Fuller has spearheaded the establishment of Guttman’s Associate of Science (A.S.) degree Program of Study, forthcoming in Fall 2021.

In recognition of her efforts to “build equity in biology and gene science across the country,” beginning right here at Guttman, Dr. Fuller has been invited to join the planning and advisory board of the Genomic Data Science Community Network, which aims “to improve access to high-end bioinformatics education and education technology for historically underserved student populations.” She is the Co-Principal Investigator of a National Science Foundation (NSF) grant focused on incorporating more culturally relevant pedagogy (CRP) into STEM courses at Hispanic Serving Institutions (HSI). Within the grant period, “all our Science, Information Technology, and half of the Math full-time faculty” will have participated in conferences, workshops, and in-house professional development; received “feedback on curricular revisions before, during, and after they’re implemented;” and contributed to a growing “repository of things that have worked, that can be used for inspiration for the classes” to come. “Because we believe that the more relevant a class is, the more engaged a student will be, and the more engaged a student is, the more likely they are to succeed,” Dr. Fuller is hopeful that CRP “just becomes a part of the way we teach.”

In addition to using CRP as “a driver of retention and success and transfer,” Dr. Fuller has integrated hands-on research into the courses she teaches – literally every single biology course offered at the College, including Introduction to Earth and Environmental Science, General Biology I and II, Microbiology, Genetics, and the science iteration of the LAS Capstone. Ensuring that her own students are “always generating some kind of new knowledge in the lab,” Dr. Fuller has also led science faculty in mapping and scaling “independent research projects as part of the curriculum at least once a semester, every semester.” When students complete these curricular undergraduate research experiences (CUREs), “they have a professional product under their belt,” whether it’s a poster, an oral presentation, an abstract. Thus, the potential scientists gain confidence and “take ownership of being an expert in an area” in public, scholarly settings. In “a shining moment [that] came out of a class project,” not one, but two of Dr. Fuller’s students were accepted to present at the top-tier American Association for the Advancement of Sciences Annual Meeting.

Under her guidance through coursework and the CUNY Research Scholars Program (CRSP), Dr. Fuller’s students conduct research directly linked to her specialization in molecular genetics, namely, the molecular basis of cancer. While in graduate school at Purdue University, she “figured out the [DNA] base pair change that causes a particular type of cancer.” With funding from an NSF start-up grant, she has recently transformed this study into a “long-term, ongoing lab project for our students.” Their direct involvement in replicating and observing genetic mutations in zebra fish and utilizing the gene-editing tool CRISPR to correct these is exemplary of Dr. Fuller’s teaching style and underlying philosophy. “I’m a firm believer in active learning, experiential education, but also an apprenticeship model.” As students practice methods that can’t be mastered through lecture alone, they add skills to their resumes. This boosts their competitive advantage for admission and transfer to baccalaureate science programs, as well as scholarships and other advancement opportunities. Dr. Fuller is quick to point out that “our students beat other students because they have that experience.”

“I think I’m pretty approachable,” Dr. Fuller reflects, “a person who enjoys working with students, talking to them like grown-ups and professionals, respecting their ideas, and helping them put them into action.” This human connection “can go such a long way, with students feeling like they belong in certain circles,” and actually prompted Dr. Fuller to choose Texas Southern University as her undergraduate college. Another effective strategy is the HBCU tour that Dr. Fuller initiated in 2016, partnering with the Career Strategist for science. Participants explore their post-Guttman transfer options and “see classrooms, lab rooms full of students that look like them… Every year we run the tour, we have at least one student who actually attends one of the schools we went to, or another school, but it’s because of that tour.” Thanks to the various interventions Dr. Fuller has fervently supported, some graduates are “studying to be medical doctors or nurses, are in Master’s programs in geology and environmental science and Earth science, they’re presenting at these big conferences – our students are doing it!”