Magdaline, Pena-Villa is a 1st-year student majoring in Liberal Arts – Science and Math. “What inspired me to do this piece was the experience I had when I first went to a New York school. I was treated with racism by students. I wrote a story that people can relate to or get to feel connected with the person in the story. For example, many people who are going through a similar experience of racism as what the girl named Madelin went through in the story, they will feel connected with the character in the story. I also want people who mistreat others because of their skin color and their language to understand what that person feels when treating them with a difference. I am proud to let people know that we are all the same regardless of our skin color. I know that these words I said need to be heard, especially in the United States.” 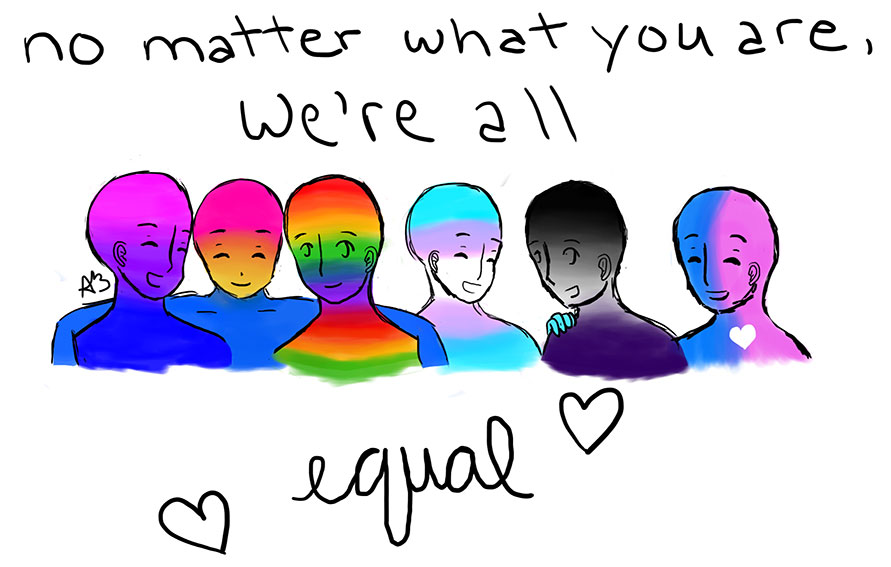 Once upon a time, a girl named Madelin had brown hair and black eyes. She was born in the Dominican Republic and was only 14 years old. Madelin’s parents worked in New York City. The first time Madelin went to school in New York, she got into eighth grade and was assigned classes in the morning. Her mother took her to school, but the school was a bit far from her house. On that school, the kids learned to read and write a new language, which was English.
When Madelin came to school, she found out that they played volleyball, and she wanted to join. The next morning, when Madelin came to the classroom, she saw that a classmate was sitting next to her, a white girl named Josery to be more specific.

Josery told the team players that she heard that the Dominican origin races were very dangerous because they were bad and selfish; that they did not know how to speak English well. Due to the several comments made by Josery, nobody on the team wanted to play with Madelin. When the volleyball team has games, they used to yelled offensive stuff at Madelin. After all those comments and discrimination against Madeline, she went to a corner and sat on the school floor. She then started crying without stopping.

When Josery got home, she sat on the couch and told her parents that she was sitting next to a girl different from her and her culture. The mother replied that she was happy that she had a new friend sitting next to her in the classroom, but that she did not understand why she told her that she was different from her if we are all the same and we have to love each other no matter what is the person’s ethnicity, culture or economic status. Josery felt bad, but she said to herself, “tomorrow I will tell my colleagues that we are all the same and that we have to love each other in the same way without a difference.” Josery went to her room very disappointed at how she has

Josery fell asleep and began to dream. In her dream, she lived in another city called Mexico, and her name was not Josery, but Nayeli. Not only did her name changed, but also her skin color also changed from white to black. Her father sat on the side of the bed and said in Spanish, “Josery, levántate, levantate, o llegarás tarde a la escuela.” Josery looked at her father and realized that it was her real father, but he was also a bit dark and spoke Spanish. She asked, “padre, padre,
¿Donde está mi Madre?” The crying father answered, “Hija, tu madre esta en la cárcel por luchar para que el racismo pare, para que blancos y negros tengamos el mismo derecho.”

Josery went to school and noticed that in Mexico, black and white children were together in the same school. Then, Josery remembered Madelin and the way she cried after she was discriminated against for not knowing English and having a different skin color. Josery, who remembered what she did to Madelin, began to cry non-stop. When the father went to pick up Josery from school, she asked him to buy him a flight to go to Africa, but he told her that only people from Africa and people of color can go to that country. Josery then said, “but father, if we are all the same, we can go and stay 5 days.” Days went by and Josery’s mother came out of jail and her father went looking for her. In the prison, where Josery’s mother was, she noticed that it was for everyone. By everyone, she meant people from different cultures and different languages. Then, at that moment, Josery remembered the night when she told her father that we are all the same. Her father and mother were there, happy after seeing how Josery was learning about acceptance of those who look different from her. Josery also realized that the color of the struggle for equality was the most beautiful of colors.

The next morning, Josery woke up crying, “mother! mother! today is the day to go to Africa.” When her father heard Josery, he said, “Hey! Josery, what is this that today is the day we were going to Africa?” Then Josery realized that it had all been a dream. “Father, mother, we are all the same,” Josery said aloud with a smile on her face. The parents were shocked and did not know what was going on with Josery, but then they realized that Josery had a dream. Then, when josery told her parents about the dream, and what she did to Madelin in real life, her parents told her, “well daughter, you have to go to school today and apologize to Madelin in front of all your classmates. Josery agreed to what her parents have told her to do and said, “mother, I will do that, but I would like for you to be there when I am saying it.”

When they got to school, Madelin was on a chair with a sad look. She then saw Josery approaching her and started crying. When all the students arrived, Josery stood up and asked all the students to please listen to her for just a few minutes. Josery began to tell them about the dream she had. Once she finished telling the dream, Josery asked Madelin to talk about her wrong behavior, everything she did to her, and everything she told her. Josery also added to her apology that she will give Madelin all the support she needs to learn English quickly. Then the volleyball team called Madelin, and they put her as captain of the volleyball team. Since then, the school team has been one of the best teams of all the New York school – they are not only the best volleyball team, but they are also fighting so that there is no more discrimination in the school system.