What It’s Like Being a Black, Gay and Non-Binary Person

Julian Joseph is a 2nd-year student majoring in Liberal Arts – Social Science & Humanities. “I have always wanted to share my voice with people and to those who are not ready to speak out for themselves. I think this is a good idea because I love being part of the queer community and being who I am. I think that people should be proud of who they are and be grateful that they are alive and here. I always say to myself that things will get better. It is always good to learn things from your past especially dealing with homophobia.” 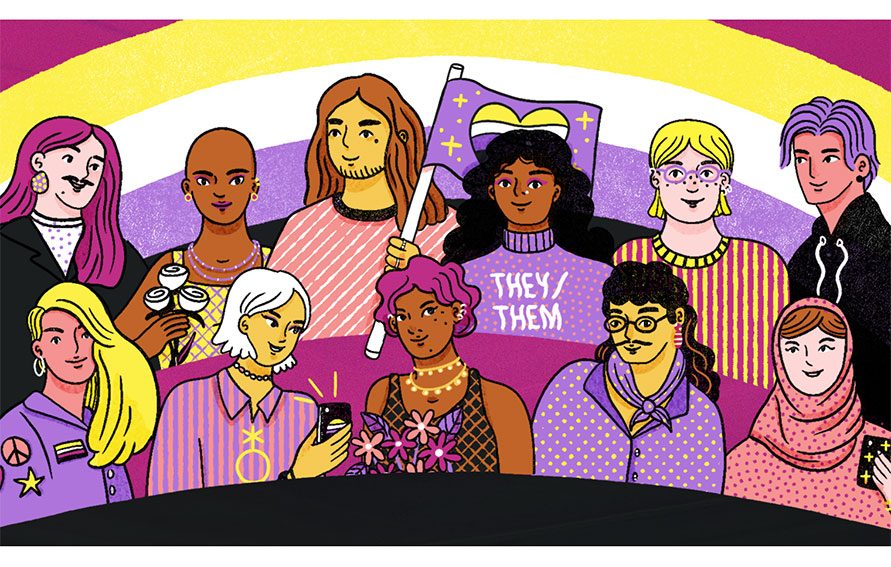 Hello, my name is Julian Joseph, and I am a second-year student at Stella and Charles Guttman Community College. My pronouns are they/them/theirs. I grew up and still live in Manhattan. I would love to explain who I am today and the challenges I had to face throughout high school. In my opinion, talking about my experience could be important because I want everyone who is questioning themselves or they identify as LGBTQ+, to know that they are not alone in this world. Also, I think it is very important to listen to each other’s stories since people may be interested in hearing certain parts of others’ stories that align with their own identity. Moving forward, I will explain how I am still here today and what am I doing as a small creator on Instagram.

I do not know how many times I have had to explain my coming out story, but what I do know is that it is very scary. Six years ago, at the age of 14, I came out to my parents. My thoughts when I came out were, “I am going to get kicked out,” “I am going to get yelled at,”, “I am going to get attacked for being gay,” etc. After coming out to my parents, they were lecturing me on how not to fall for straight guys, which was weird and funny at the same time. Throughout high school, I had to deal with homophobia, which is something unexpected. When it is a girl who is a lesbian, most guys would think that it is hot. When it is a gay guy, however, most guys would say that they are disgusting, they are the F word, etc. As many times as I have tried to be nice and make guy friends, there is always an issue because of my sexuality. It matters to me that I cannot do this, which does not make sense. Also, it does not make sense when guys constantly make gay jokes and use coming out as a joke. I am always asking myself why there is no one teaching students about homophobia, and why as gay people we must go through something scary? During high school, I have been educating myself on LGBTQ + topics. I knew that was important to me because I do not want to have queer people feel as if they are alone. However, I do not want to be a counselor or a psychologist, I just usually dream about doing these things because it is what I love.

After high school, it took me a couple of years to find out who I am. Then, I started going to the Summer Bridge Program in 2019 because I wanted to be able to connect with new people on campus by being friends with them and asking for their social media. In my opinion, that was a great idea because this was exactly what I needed – I needed a safe space with friends to talk to them about whatever, which I think is nice. Looking at the freshman year of myself, I looked the same, but I started to grow out my hair. I never got to learn about my skin color because I thought I should focus on my classes more than to start learning about it.

Being black did become a huge topic ever since the pandemic started. I got to learn about the Black Lives Matter movement, about what it means to be black, and learned that there are different shades of black: dark skin, light skin, brown skin, albino… . Also, that I am brown skin and I felt so happy about it. I feel like there was a misconception in the black community because, in the black community, they cannot accept the fact that you are gay, bi, trans or non-binary. There are queer people in the black community and there will always be. The older black community is filled with homophobia, sexism, misogyny, bigotry. You would tell them about depression, anxiety or mental health in general, and they would not believe you because they would say that you have a house, food, money, a roof over your head. What I think about it is that it can be true that you have all these things, however, you may also feel as if you cannot open up to them, which is the scariest part.

Toxic masculinity also plays a huge role in the community. Learning about and now getting to teach others about toxic masculinity is important because I needed to know why that exists for boys and men. An example of toxic masculinity I can think of is showing emotions. Most men will think that showing emotions will make you weak. They do not seem to realize that we all have emotions and that it is not selective to women, girls or some other people. I usually think that we cannot escape from emotions. I do not like to cry in public, I like to cry when I’m either alone or with my friends because I like to let it out. Now, I am still educating myself and still learning about these types of topics from social media and YouTube. Besides that, I thought it was a good idea to put my support out there and proceeded to use my Instagram as the right place/platform to make that happen.

A year ago, I came out on Instagram as non-binary. It felt so good to come out as non-binary because I do not like fitting in the binary. People assume that being non-binary is what is between your legs, which is a false statement. The struggle of being non-binary is having to hear people saying that I am a boy, or I am a man. I never really focused on this until I learned about why I do not need to prove to people that I am non-binary. Non-binary people can present themselves with masculine clothing, feminine clothing or both. Most people believe that you need to have an androgynous style to be non-binary, but you cannot tell how someone identifies based on their looks. That is why it is important to ask about their sexual orientation. While being non-binary, I was figuring out my pronouns. I used to go by he/him, then I went to he/they, but those pronouns made me feel uncomfortable. On February 18th, I announced my pronouns as they/them. I would love people to use my preferred pronouns because I wanted to be more comfortable. I want to be able to say that I feel appreciated and heard to let people know about this. Not every non-binary person goes by they/them. Some non-binary people will go by any pronouns. Being non-binary is not a trend or a personality trait, it is a real identity that has existed for thousands of years.

On my social media, I was looking up if any creators are queer and non-binary and noticed that most of them are not getting as much recognition as those creators who are not queer and non-binary. Regardless of that, I got noticed by two queer creators and it was so hard to believe it… I was very happy that I got noticed. I started thinking about what I wanted to do with my social media because some people were texting me on Instagram saying that they like what I post and that I am using my platform to educate people about queer content. I want to be able to make queer content for people and teach them about sexuality, homophobia, gender, pronouns, and topics like such because I want to hear them telling their stories and give them as much advice as I can. Also, I am not only learning about these things I have mentioned, but I am also learning to be more inclusive. Being more inclusive means, I need people to hear my voice and let others use theirs. I need to improve on being more open-minded during conversations.

Throughout this essay, I have shared a lot. Being who I am feels more welcoming. I am not ashamed of who I am since I would not be the person I am today if I did not go through the things in my past. I am glad I shared my story because besides going to a coming-out event on campus, I have never gotten to share something more than my sexuality. It is not that easy to find yourself. It does not matter how long it will take, but you will still find yourself, it is a process. Being who I am plays a huge part of my life and I can still look at these struggles of being black, being gay, and being non-binary. I can learn from them. Being who I am is not a reward, a prize or a badge of shame. I never felt happier about myself. I love to be vocal about anything even if it is political. To close this essay, I would like to present myself again: Hi I am Julian Joseph, a second-year student at Stella and Charles Guttman Community College. I identify as nonbinary, and I am proud to be who I am. I am glad I have told my story of what it is like being a black, gay, and non-binary person in New York City.