From Gambia to Guttman with Gumption 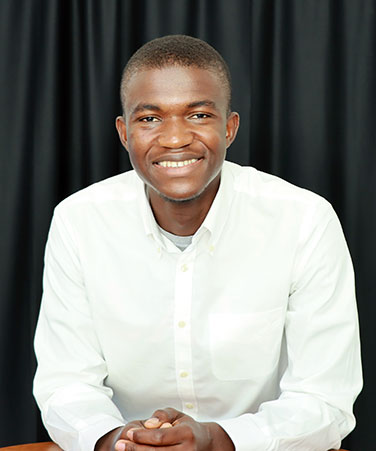 Bashir Juwara exudes positivity. Digital and in-person encounters with the 2021-2022 Guttman Community College Student Government Association (SGA) President leave a person at ease – he radiates calm and confidence. In his four years in America, Mr. Juwara has manifested his gumption to succeed by seeking out and embracing the opportunities he’s encountered on his journey. He has big plans for the future, and wants to spread motivation and make a positive change at Guttman and beyond.

Mr. Juwara came to the United States from Gambia, West Africa. He grew up helping on his family farm, but as he writes in a scholarship essay, he felt “stuck, and there was no hope” in his village. With the help of his uncle, he left Gambia for Spain. A rough year there presented no job or education options. At the age of seventeen and without the support of his parents, he decided to move to New York to find a job and provide for his parents and siblings back home. He moved in with his uncle in the Bronx, found a full-time job, and was thrilled to enroll in high school to begin his English-language education.

The faculty, staff, and students at International Community High School (ICHS) were Mr. Juwara’s guiding light when he was forced to handle all the pressures of adulthood. He writes, “Even though I was alone, I did not feel lonely. I felt supported in all types of ways, specifically, mentally supported. Anytime I attempted to quit, the school would give me a reason to keep pushing.” His mission to lead also began at ICHS, where he held his first position in student government.

That sense of community in his high school, the individual attention he received, his newly-found appreciation for multiculturalism, and the guidance he received from Guttman alumna Cesarina Checo, who worked as a counselor at ICHS, made Mr. Juwara decide to attend Guttman. He likes that Guttman is “small, but mighty in knowledge,” he said. The College is proving the perfect place to nurture his academic and leadership aspirations. He’s majoring in liberal arts, which serves as a foundation for his future plans to study political science. As a freshman at Guttman, he completed The National Society of Leadership and Success program. He is elated to have been elected SGA president this year.

In his role as president, Mr. Juwara wants to “positively contribute to the reopening and make sure the students are safe,” he said.  He is a member of the College’s Reopening Committee, and recognizes both the excitement and the possible fear students might be feeling about returning to campus. He acknowledges the importance of acting as the representative of the student voice during an unprecedented time of uncertainty caused by the COVID-19 pandemic.

Cultivating a connection with his fellow students is very important to Mr. Juwara. He and the SGA team are ready to meet that challenge to ensure that all Guttman students are aware of the multitude of resources and opportunities available to them. Studying remotely during his freshman year was not easy for Mr. Juwara, but he said he felt “safe,” because he knew he had a support network of advisors, faculty, and friends that he could rely on. As president, he wants to help others feel the same.

This summer, in addition to fulfilling his duties as SGA president, the Guttman All-Star is working at Hostos Community College. He is a teaching assistant at the Summer Intensive English Language, where he helps high school students to develop their writing and college readiness skills. When he’s not busy helping others, Mr. Juwara likes to read books on philosophy, personal development, and leadership. He’s also a big soccer fan. He was crushed when Spain got eliminated in the recent Euro Cup.

Mr. Juwara is grateful to have been able to come to America, and encourages everyone to take advantage of its many opportunities while also being aware of the inequality and injustice that exist in our country. “I am an immigrant, and I will do everything I can to become as successful as I want to be,” he said. He describes himself as self-motivated. One of the things he’s enjoyed most about his experience in the US is the sense of empowerment he’s felt throughout his journey. Being able to make his own decisions and feel independent has been life-changing, he said. Mr. Juwara’s dream is to become a US lawmaker or senator. He’s also thinking about returning to Gambia after completing his education. “I want to return when I know for sure that my return will help my people …  Wherever I end up, I want to contribute to the community,” he said.