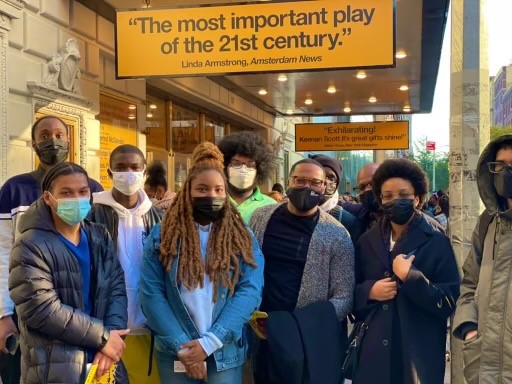 Dr. Johnson and students on Broadway

On November 6, President Johnson and students from the United Men of Color (UMOC) and Women of G.R.I.T groups, accompanied by Professor of Political Science Dr. Marcus Allen, Director of Student Leadership & Campus Life Nestor Melendez, and Student LEADS Support Specialist Maryanne Sackarnoski, had a chance to attend Thoughts of a Colored Man on Broadway. The critically acclaimed play reveals the experiences, hopes, and dreams of seven men. The script takes place in Brooklyn. During a group discussion after the event, the attendees shared their thoughts and impressions about the theatrical experience.

The conversation about the play was very impactful. All participants saw parts of their own lives reflected in the characters’ experiences. Dr. Allen said, “there is not a Man of Color who has come across my personal life that I did not see in each of these particular characters.” The play resonated with everyone who attended. It brought to light and life the complexities of emotions and depth of personalities that are often omitted in other portrayals of Men of Color.

During the discussion, students brought us topics like the multiple dimensions of masculinity, institutional racism, male role models of Men of Color, the stigma of being a Person of Color, and the portrayal of stifled or lost potential of Men of Color in the play. Kristian Caraballo said, “it is important for a show like this to have a residency on Broadway,” so all young people can see examples of Men of Color they can look up to. Ja’nay felt that the experiences of the men in the play can easily resonate with women as well. Zakee Suluki relayed in detail how he saw his experience as a Black man living in New York City, his ambitions and dreams, portrayed in the play.

The trip was one of multiple student engagement opportunities organized by the Office of Student Leadership & Campus Life during the Fall 1 semester. Students should be on the lookout for other cultural engagements to come.