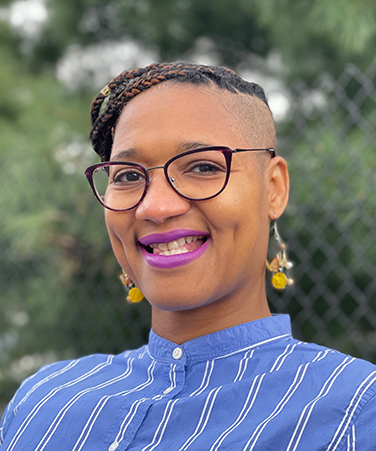 “As an anthropologist, one of my aims is to challenge students to understand what it means to think anthropologically about a particular social problem; that is, how might one learn to critically examine so-called ‘natural’ states of being through a cultural lens? And how are micro processes of the everyday reflective of macro processes? Yeah, I secretly want them all to become anthropologists, but I understand that we need more than anthropologists for the world to work.”

karen g. williams has always loved teaching and has often found herself in roles where she is acting as a facilitator. This, combined with her particular love for teaching ethnographic methods, is what led her to Guttman in the fall of 2019. “When I had the opportunity to focus on courses that allowed me to take a more ethnographic approach, such as Ethnographies of Work, I wanted in. And Guttman felt like it could be a supportive place since I knew a few anthropologists who were already teaching there,” said williams. From day one, she says that she “felt part of the crew at Guttman.” Another motivating factor—she had been wanting to return to the CUNY system. “I received my PhD from the Graduate Center and I’ve taught at Queens College and Brooklyn College, so I have a long history with CUNY.”

williams’ current discipline is anthropology, more specifically, she is a cultural anthropologist with an urban focus. “But it hasn’t always been like that,” says williams. “I actually have a BFA in fashion design and performance art from the School of the Art Institute of Chicago, and an MA in Performance Studies from NYU Tisch School of Arts.” When williams was in her early twenties, she wanted to be a fashion designer. But as she started working at a community arts center in Chicago, she became more aware of the social injustices in the world through working with the youth in the community. “So my interest turned toward the criminal justice system. Since then, regardless of the medium or discipline, I’ve had a focus on a wide range of issues within our criminal justice system.” She describes her journey as one in which she went from making and supporting youth to create performance art about criminal justice issues to analyzing criminal justice issues through an anthropological perspective. “If I were to sum it up,” says williams, “my scholarship reflects a deep concern with the socio-economic and racial inequalities that underlie the criminal justice system as well as current social justice movements.”

Presently, williams is working on a book project that is tentatively titled The Science of Incarceration: Care, Coercion, and Consent. williams’ book represents long-term ethnographic research on the criminal justice system, specifically prisoner reentry in the Midwest. “I examine how prisons are instituting evidence-based practices to guide their work and how this approach shifts the culture of the intuitions,” says williams. The project is based on eighteen months of ethnographic field research in four prisons in the Midwest. The current phase of the project is being supported by an ACLS/Mellon Community College Faculty Fellowship.

At Guttman, williams teaches Ethnographies of Work 1 and 2, Crime and Justice in Urban Society, Introduction to Cultural Anthropology, Introduction to Urban Studies, and Capstone Seminar in the Liberal Arts. When asked to describe her teaching style, she replies, “That’s a funny question because I think what you think your style is might not be how it’s perceived.” Generally speaking, she says she tries to bring “a fierce compassion when teaching. What I mean is, I try to put myself in the student’s position, particularly when they are struggling. I know what it feels like to struggle, to have challenges and barriers, so I want to start there. And I don’t end there, so after becoming present to what is, I’m like, now what? What is possible given this situation? I try to be real with my students; I want them to see that we are all people in the classroom trying to make sense of the material.” She says that even though she may have more years of engaging with this material, she still has something to learn too. “So, I also try to be reflexive; I welcome feedback from my students.” Based on the insights of her students, she has made revisions to her syllabi. “But I will say that my fierce compassion can get lost in translation, particularly in the classroom. In other words, students might mostly see the ‘fierceness’ part with only glimmers of my quirky sense of humor. The compassion really comes out when I work one-on-one with students, which I adore.”

Indeed, williams says that one of her most memorable moments was meeting with a student who was overwhelmed with the readings and the amount of time that it took her to get through the readings. “I was surprised because she was a top performing student and, in that moment, I realized she wanted more—she wanted to do better. We discussed how she was doing a lot of translating as she read, since English was not what she spoke in the home. As we discussed strategies—but, more importantly, affirmed that there was nothing wrong with her strategies—that her process was her process—she looked at me and said, ‘Oh you are nice.’ I chuckled and smiled. And the student felt seen, and she saw me too. It makes me happy when we can see each other.”

When it comes to projects that williams is collaborating on with her students, she mentions that she has just finished working on the Global Scholars Achieving Career Success Program (GSACS), which is a virtual global exchange program. williams’ anthropology class teamed up with students at Abdelmalek Essaâdi University in Tangiers, Morocco. “It was a humbling learning experience for the students and me,” says williams. The collaborative project explored the issue of gender inequality, in relation to the United Nations Sustainable Development Goal #10 of “Reduced Inequalities.” As a result of participating in GSACS, students learned cooperative skills, project design, and how to execute a project transnationally. To view the students’ final projects, please click here.