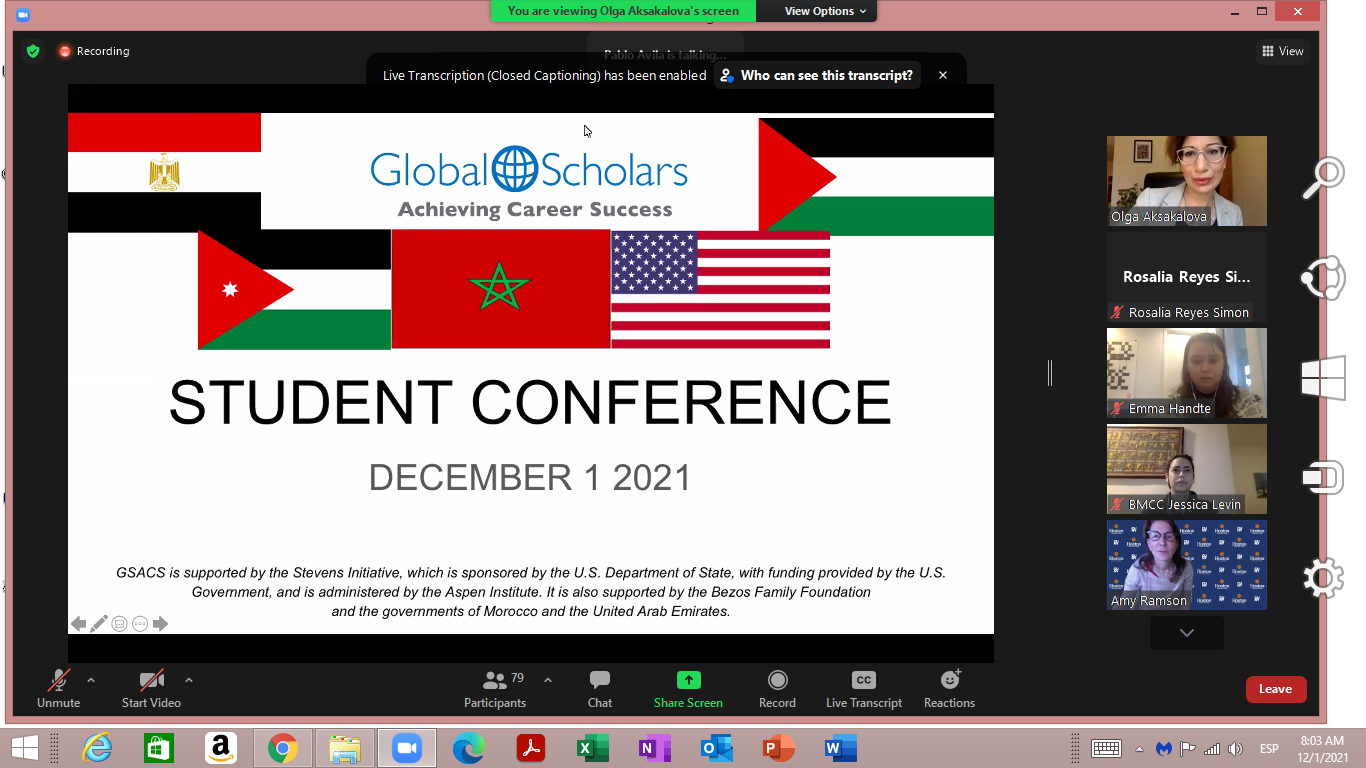 The two-day virtual conference was attended by over 300 students, faculty, staff and other participants from Egypt, Jordan, Morocco, Palestinian Territories, and New York City. Student presentations featured projects on topics such as the water crisis in Egypt & the USA, the role of government and civil society to guarantee water access and quality in Bethlehem and New York City, and a start-up proposal for a hydration project. To present, students used a variety of media and tools including PowerPoint presentations, mobile apps, podcasts, and interviews. The conference also featured keynote speakers, including Judge Zahid N. Quraishi – United States District Judge for the District of New Jersey and the first federally appointed Muslim American judge in the US – as well Saed K. Khayat, Professor in Hydrogeology and Isotopes Hydrology at Palestine Technical University Kadoorie (PTUK) who spoke about how climate change has impacted on water resources in the Middle East.

Students from Professor Williams’ Intro to Cultural Anthropology course were paired with Professor Aicha Bouchara’s class from Abdelmalek Essaâdi University (UAE) in Morocco. On December 4th, Guttman student Jasmine Herrera Ramirez and UAE student Younes Soussi synchronously presented their group’s project in which they examined gender inequality in employment. Students were divided into four groups and each group had students from both Institutions. Each group decided on the gender inequality field they would explore and conceived a research protocol to be carried out. Many of them created surveys to be distributed on Facebook, LinkedIn, Instagram and through other networks. Herrera and Soussi´s team in particular examined gender inequality at work: “to quickly recap, according to the study and responses, promotions are not just based on merit, seniority, experience, and hard work, but also on gender in some circumstances. Many women are promoted in companies, but still not at the same rate as men and it is more difficult for women than men to advance in their careers, particularly if they are mothers, single mothers, or wives,” said Herrera Ramirez during the presentation. 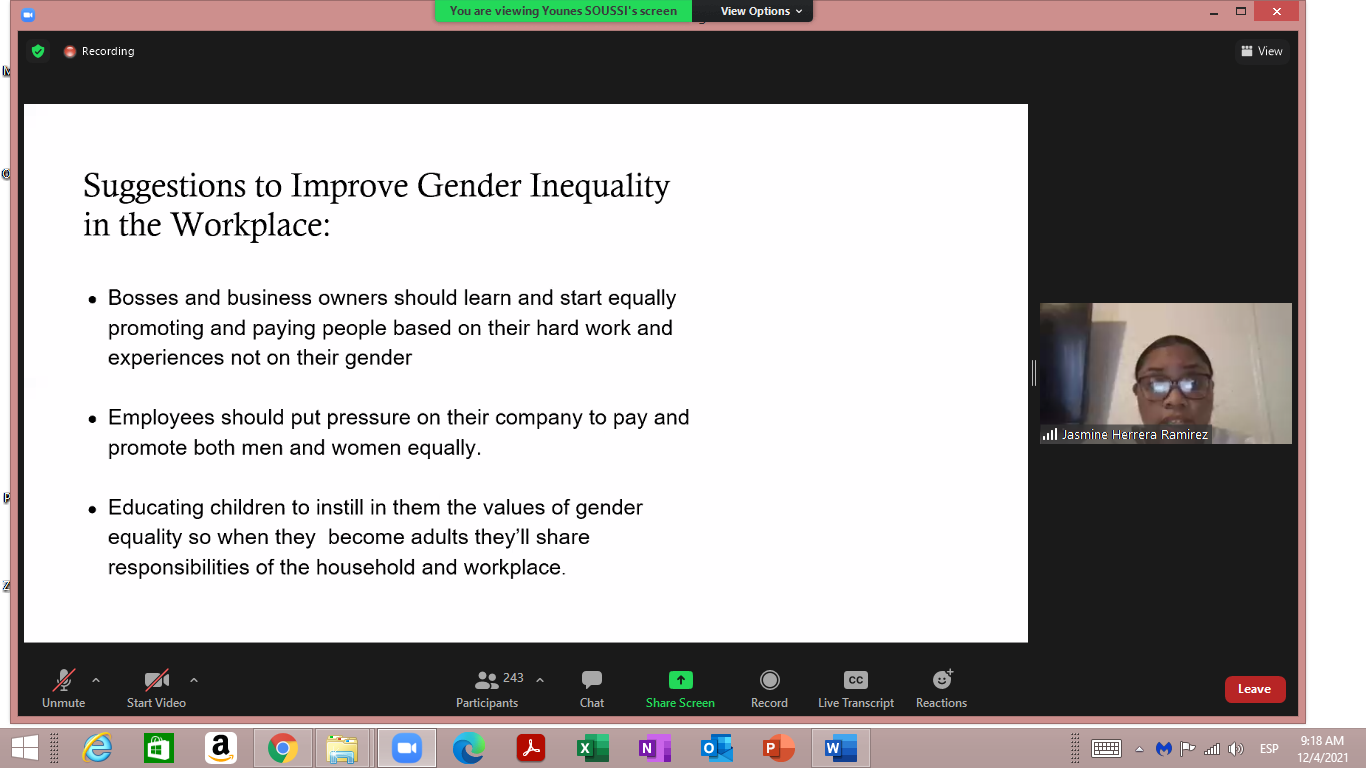 “GSACS was an exciting opportunity for both the students and the faculty participating. I was learning alongside the students — developing transnational collaboration skills and seeing gender inequality from a different perspective. I was impressed with final projects, and their determination to complete them for the conference,” said Prof. Williams.

Meanwhile, students in Professor Finesurrey’s History of Urban Life course were paired with  Professor Momen ElHusseiny at AUC and conducted a comparative study of ordinary public life in the cities of Cairo and New York. Profs. Finesurrey and ElHusseiny put together an asynchronous video montage in which they presented their students’ projects on the theme of “Small shops, big cities.” As Prof. Finesurrey elaborated, their presentation shows “how small businesses in New York and Cairo, two of the world’s economic and cultural capitals, navigated a global pandemic, movements for social justice, vast inequity, and the uneven distribution of government resources. Further, by designing and producing an oral history project that explores students’ respective communities with the undergraduates themselves, Guttman students unlocked a history only accessible by tapping into the knowledge and networks of CUNY’s incredibly diverse student body.”

Patricia Jean, Guttman Career Program Manager, and Dr. Grace Pai, Assistant Professor and Faculty Coordinator of International Education at Guttman who leads the GSACS program at Guttman, also conducted career workshops each day of the conference. Students had the opportunity to learn about what NACE competencies and skills they had developed through GSACS, how they could incorporate these skills into their resumé and interviews, how to start a professional LinkedIn profile, and how to claim and display a Guttman global learning online badge in their LinkedIn profile.

Students reflected on their GSACS experiences, such as one student who shared: “I have learned different skills, one of them is how to use technology for my presentations.” Another student added: “it opened my eyes to global issues, like we only see the issues we face here where we live, but a lot of issues we are facing here other people are facing as well, no matter where they are.” 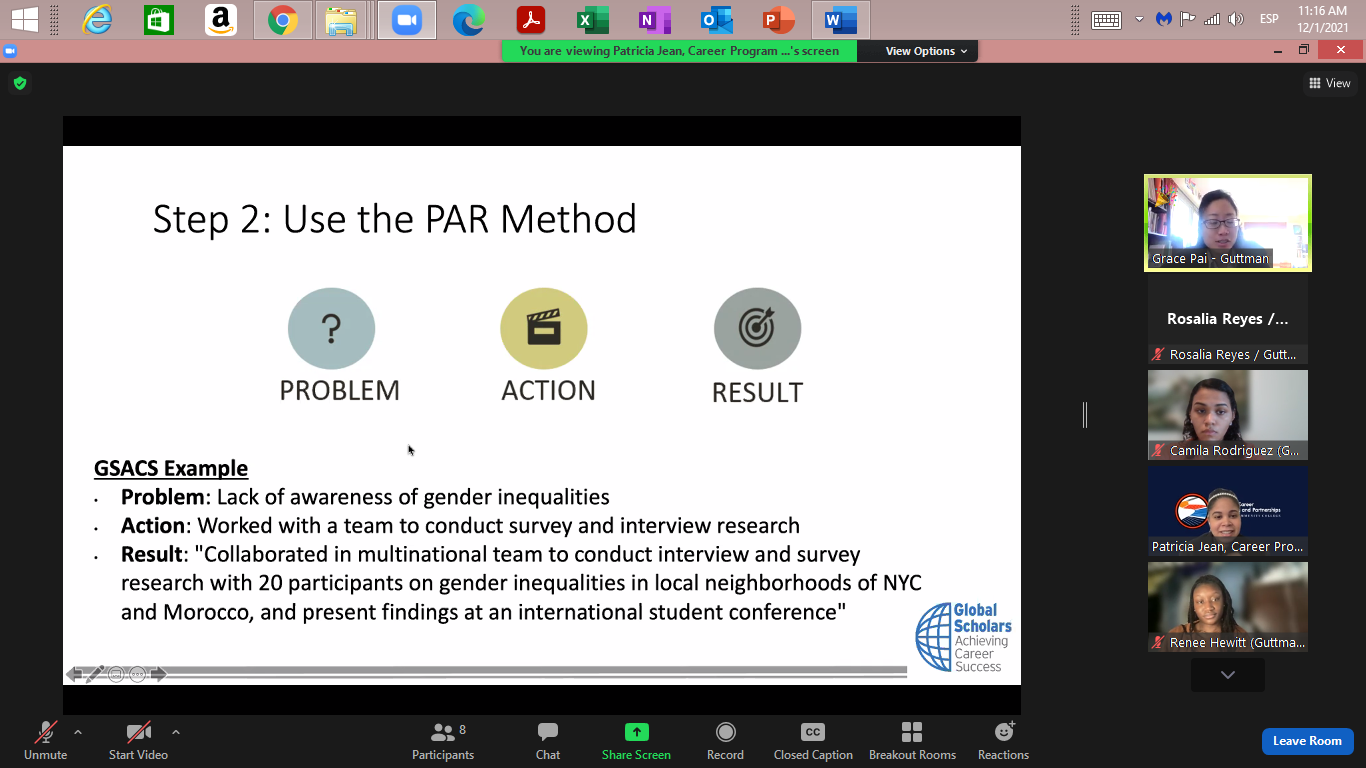