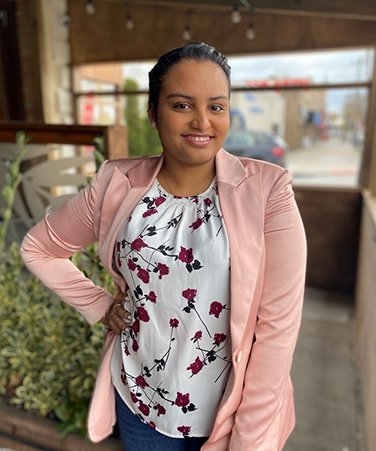 Gugeeta Cheetram is a proud Guttman alumna of the class of 2019. She is now an introspective leader eager to help others and she is not afraid to speak her mind. She credits the College with teaching her to be a better leader and role model, helping her grow and decipher wrong from right. It was during her time at Guttman that she stepped into her first official leadership role as Student Government Association Secretary, later becoming Vice President. She transferred to Lehman College where she continued to develop her skills while earning her bachelor’s degree during the pandemic and juggling multiple responsibilities.

Gugeeta is the oldest of five siblings. She’s always considered it her responsibility to guide her brothers and sisters on the right path. She always tries to keep a positive attitude but does not hesitate to set her boundaries with people and situations that make her extend herself beyond her limits. Her journey to college was not easy. She came to the United States from Guyana at the age of nine. She recalls being bullied in high school and how that shaped her outlook on life. “I strongly believe you need to embrace the negativity in your life, so you can welcome the positivity,” she said, noting the importance of being able to look past the hurt.

She chose to attend Guttman because of the school’s affordability and the multitude of resources available to students. As someone who is passionate about helping people, Gugeeta majored in Human Services. Hesitant to get involved in student government at first, she realized the experience would be a good fit for her skillset after meeting the preceding SGA team and receiving guidance from the Director of Campus Life. When she stepped into office, one of Gugeeta’s major contributions was single-handedly rewriting the organization’s constitution to ensure accountability and more transparency among all SGA members. She also joined Women of G.R.I.T., a mentorship program at Guttman open to all women/women-identified students.

Her experience at Guttman led her to be a part of student government at Lehman College, where she majored in political science. She was elected Vice President of Internal Affairs. In addition to figuring out remote learning, Gugeeta and her team were also faced with the challenges the new situation brought to the SGA agenda. She said navigating those waters taught her a lot about politics and figuring out people’s intentions. She also realized the pandemic has made her learn to give herself and others more grace and patience.

Gugeeta’s dream job is to work at the United Nations being directly involved with the organization’s humanitarian efforts to help kids. She graduated from Lehman in 2021 and is hoping to get involved in local community organizations to gain the experience needed to achieve her ultimate goal of working for the UN. Her advice to Guttman students is to hold themselves accountable and step up to truly discover their full potential. She said college students in New York City have unlimited possibilities at their feet, and it is up to the individual to “shoot for the moon and land among the stars.” She is grateful to all the professors and mentors she has encountered at Guttman and throughout her path for helping her discover her authentic self. “You don’t always have to be the first in something, you just have to be the leader,” she said. She’s proud of her leadership experience and wants others to know that leaders don’t always have to take the spotlight to make an impact.