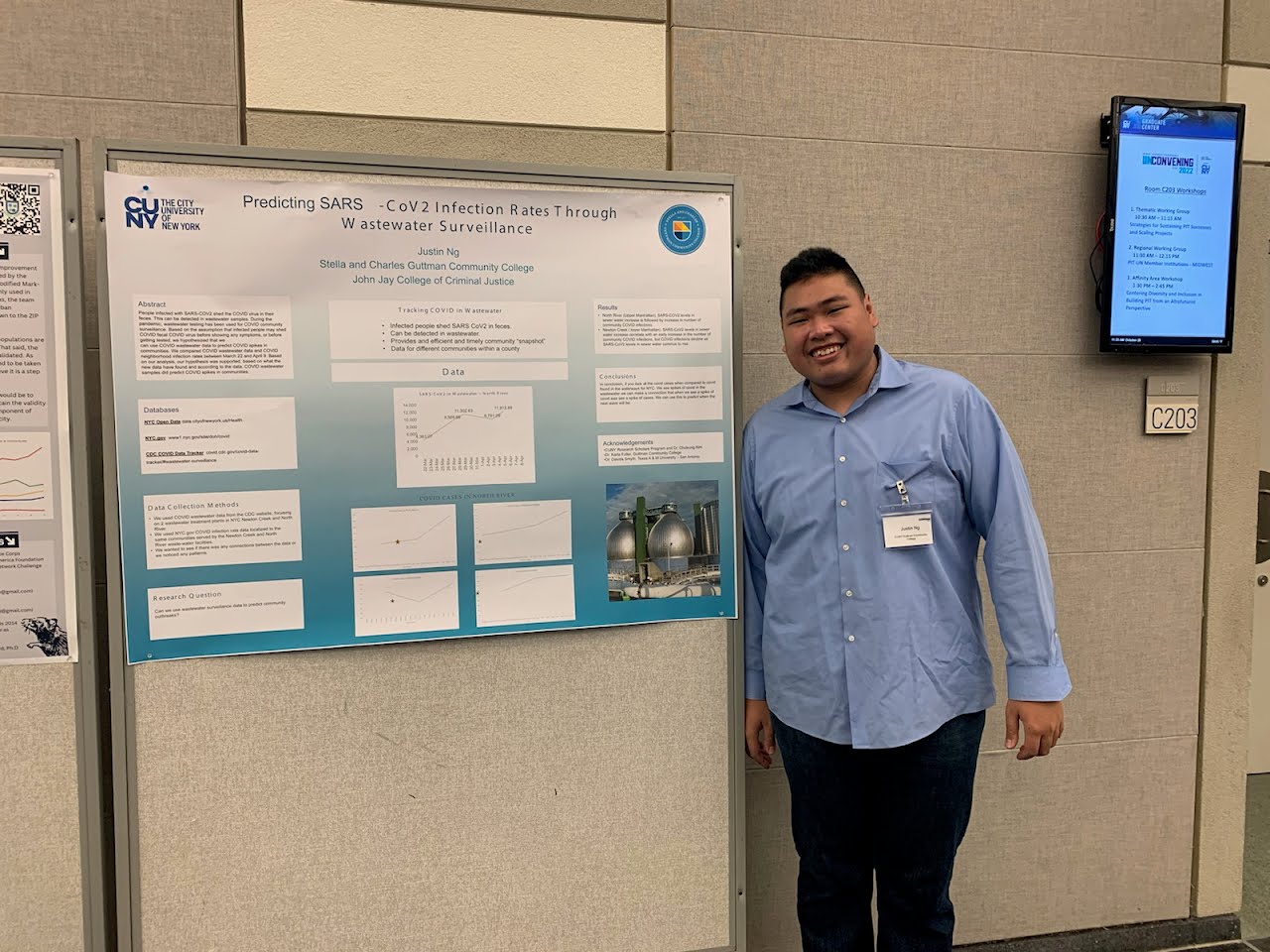 Justin Ng has the problem of every gifted student trying to figure out their career path. When you’re interested in—and good at—many things, how do you choose just one? You don’t.

To understand why this 2022 Guttman alumnus, one of two undergraduate students from 48 universities chosen to present his scientific research at last month’s national Public Interest Technology Convening almost finished his first transfer semester in John Jay’s Security, Fire, and Emergency Management B.S. program, you have to take a few steps back. Well, a lot of steps back.

You’d start with “high school Justin” wrestling with Regents in 2017. Then you’d see him in a 3-year transition program honing important life skills in a variety of work environments, with internships in retail, office, and school settings. Process of elimination, deciding what he liked, what he didn’t. Realizing that the jobs he liked required a college degree. A friend who graduated from Guttman recommended he apply. Then COVID happened. But Justin was glad all his classes were online, so he didn’t have to deal with new people in a new place and could make friends with classmates through Instagram.

He signed up as a Business major. Then switched to Liberal Arts. In his required science course, his professor, Dr. Karla Fuller, told him, “Justin, you have a science brain.” When she asked the class who might be interested in a mentored research project with CUNY’s Research Scholars Program (CRSP), she really hoped he’d apply. “He ‘gets in the weeds’ and likes it there,” she noted.

Justin figured he’d try. It was 2021, and COVID cases were rising and falling erratically all over the city. He wondered if there was a way to predict when the virus would surge next. Professor Fuller pointed him to the CDC website where he found publicly available city data from wastewater sampling. Justin was most interested in the data from two of the city’s wastewater treatment plants, the Newton Creek and North River, and compared it to the NYC.gov infection rate data localized to the areas around Guttman and his Manhattan neighborhood. “We wanted to see if there were any connections, any patterns,” said Justin. “Studying the data, we concluded that spikes of COVID in the wastewater could predict when the next wave of infection would occur.”

Justin didn’t win a prize for his “Predicting Sars-COV2 Infection Rates Through Wastewater Surveillance” at the CRSP Summer Symposium, but apparently, the graduate students evaluating the thirty submitted projects were impressed. They recommended him for a poster session to present at this year’s Public Interest Technology-University Network, a gathering of civic-minded technologists from all over the country who focus on actionable research for equitable and just solutions that can best serve the public.

That was a month ago, which brings us to today. Justin’s enjoying his classes as an Emergency Management major. But he sees how Business Admin could be useful. And his John Jay professors urge him to take Physics.

Asked where his path may lead, Justin pauses. “I don’t stress about stuff. I’m not afraid to change. I know I’ll find something.” Then he adds, “Maybe I’ll minor in Science.”